Peyronie’s disease has been recognized as an unusual wound healing disorder of the penis. It has been estimated to affect up to 10% of adult men. It is believed that an injury to the penis, oftentimes not recognized, can result in an exuberant internal scarring response that interferes with the elasticity of the tissue in that area. What is characteristic about Peyronie’s disease is that the scar tissue, which develops inside the penis, does not resolve. The curvature, indentation, or loss of length that occurs as a result of the scar tissue tends to be permanent.

Although there has been a good deal of research, the actual cause of Peyronie’s disease is not clearly understood and, as a result, no reliably efficacious non-surgical treatment options have emerged. Non-surgical treatments that appear to make sense include oral generic pentoxifylline and the amino acid citrulline. These two drugs are inexpensive and can be used together safely. Rarely does oral medication therapy alone result in significant correction of the curvature, indentation, or loss of length. These two simple treatments together along with some combination of the following more invasive treatments have a greater likelihood of at least stabilizing the scarring process and may result in some improvement in the deformity. 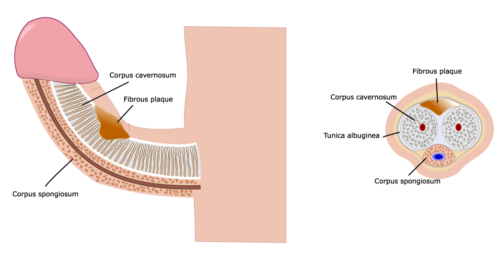 The other, more invasive, options include traction therapy and injection therapy into the scar tissue. Traction therapy involves wearing a device on the penis typically for a minimum of 3 or more hours per day. Injection therapy with verapamil and/or interferon has been used historically but is not FDA approved. Injection therapy with Xiaflex, which was approved by the FDA in 2013, is currently available. Curvature correction with Xiaflex has been found to be on average, around 25-30% but some patients have noted no improvement in spite of undergoing a series of 8 or more injections. Xiaflex is expensive but typically covered by insurance. Although post-injection black and blue can be quite pronounced it recovers in 2 weeks or less. There is a low risk of penile rupture due to the softening of the scar tissue from Xiaflex. Various new purported treatments have been offered including low intensity shockwave (LiSWT), Platelet Rich Plasma (PRP) injections, and even stem-cell injections, but none have shown benefit for the treatment of Peyronie’s disease and they are not covered by insurance.

Surgical treatment options have proven effective for correction of deformity caused by Peyronie’s, but surgery is only indicated when the scarring is stable.

Surgical treatment options have proven effective for correction of deformity caused by Peyronie’s, but surgery is only indicated when the scarring is stable – at least one year from onset of the scarring process. The surgical approach would depend upon severity of deformity and quality of preoperative erections.

The key for men with suspected new onset of Peyronie’s disease is to seek evaluation by a urologist familiar with the diagnosis and treatment of this disorder as soon as possible. The hope is that non-surgical treatment may reduce progression of the scarring and, at a minimum, stabilize the curvature, indentation, or loss of length. Men with stable disease will have the additional option of surgical correction.

Surgical treatment of Peyronie’s disease is the “gold-standard” approach to correct deformity. The goal is to decrease curvature and preserve or enhance rigidity to allow successful penetrative sexual activity. The choice of surgery has been outlined in multiple algorithms and guidelines and various surgical techniques exist.

For men who have strong preoperative erections, the deformity can be addressed without placement of a penile prosthesis (implant). The choice of surgical approach depends on the severity of the deformity (curvature, indentation, loss of length).

A patient has one good opportunity at correction so only an experienced surgeon should perform these procedures.

For men who have curvature less than 60-70 degrees and no significant hourglass deformity or hinge effect (buckling of the erect penis when pressure is placed on it), a tunica plication operation can be performed. This has been referred to as a shortening procedure, as it does result in a loss of penile length to make the penis straight. The likelihood of any significant loss of length varies based on the severity of curvature and may be decreased by using post-operative traction therapy. This approach is the least invasive surgical option, and has the lowest likelihood of causing post-operative erectile dysfunction.

For men who have curvature greater than 60-70 degrees and/or there is a significant hourglass deformity or indentation causing a hinge effect, then the best approach may be to perform a partial excision of the scar tissue with placement of a patch graft. This operation is indicated only for patients with strong preoperative erections and severe deformity, and is more likely to cause postoperative erectile dysfunction. Reports by experts in the field who perform this operation suggest about a 30% likelihood of diminished rigidity, which frequently will respond successfully to medications like Viagra (sildenafil) or Cialis (tadalafil). Success with this grafting operation is based upon the preoperative erectile function as well as the skill and experience of the operating surgeon. Although the sensory nerves of the penis will have to be elevated to correct severe deformities, serious permanent sensory loss is extremely rare when performed by a skilled, experienced surgeon. This operation is considered a lengthening procedure because the shortened scarred aspect of the penis is lengthened and the patient should not expect to have significant loss of penile length.

For men who have erectile dysfunction and do not respond well to Viagra or Cialis prior to corrective Peyronie’s surgery, a penile prosthesis is recommended. Usually an inflatable type of device is used and then straightening maneuvers and surgical techniques are performed as required based on the severity of the deformity.

Surgery is, without a doubt, the most likely approach to be able to straighten the penis to less than 20 degrees of curvature in any direction, which typically does not interfere with penetrative sex. Surgery should not be thought of as the approach to restore the penis back to its condition prior to Peyronie’s disease. Although this may occur, the patient should set his expectations to being “functionally straight” and not necessarily having the same penis he had before developing Peyronie’s.

The key to success with surgery will be going to a surgeon who performs these operations on a regular basis. A patient has one good opportunity at correction so only an experienced surgeon should perform these procedures. All of these operations can typically be performed as an outpatient or with one evening in the hospital. Post-operative pain for the procedures not including prosthesis is typically managed well with Tylenol-type medication but may require a short course of oral narcotic pain relievers. Following surgery, in particular, without prosthesis, post-operative rehabilitation is critical to the later function of the penis. Rehabilitation typically begins 2 weeks after surgery with massage and stretch therapy and at 3-4 weeks after surgery penile traction therapy is started. The goal is to prevent contraction of the operated upon penis and to guide straight healing. A traction device is recommended and should be worn for 3 or more hours per day for 3 months. Published studies have shown that men who use traction after surgery typically gain more length than those who had surgical correction of their curvature without using traction.

«
Ask Renée: ED Disclosure?
»
Willing to Put in the Work?